The EnCo CloudChannel has been available to users since the launch of the EnCo platform. Its goal has always been to help connect various assets together from our platform as well as to the outside world without the complication or the programming skills required to master a tool like an ESB.

At the very start, CloudChannel was especially developed to support collecting data sent by LoRa devices, and evolved over time to include more inbound (HTTP and MQTT) as well as outbound capabilities (HTTP, MQTT, SMS, MS Azure Event Hub, WayLay, AllThingsTalk Maker, …).  In parallel, we also gave users the ability to extend from monoChannel to multiChannels definitions, a capability especially useful when different routing decisions were to be applied to source events.

Early February, you will find on the EnCo marketplace the next evolution of our event hub capability, called CloudEngine (CloE). While keeping the same principle at the core, ie making it easier to connect EnCo’s, partners’ and 3rd party assets together, we believed it was time to add powerful data manipulation and programmatic capabilities.

With CloudEngine, you still have the ability to create and manage your channels with a graphical user interface or with APIs. Sharp or experienced eyes will see directly, as shown on the picture below, that next to a major UI overhaul there are already a few new features visible, such as the ability to take SMS as inbound events (this will require that you have a dedicated number or registered keywords on our shared short number) or a new mail outbound endpoint.

As with CloudChannel, CloudEngine lets you define the associated data structure coming from your inbound endpoints (“Parser”) as well as simple rules (“Logic”) to trigger a desired outbound endpoint.

In CloudEngine, Inbound endpoints have a new tagging capabilities, as shown below for the HTTP inbound endpoint configuration. The tag is just a parameter added to the endpoint URL. This means for you that the same flow can be designed and used to support multiple desired scenarios, potentially drastically reducing the number of Flows that will need to be created on the platform. Take this to LoRa, and it means a Flow can address all of your LoRa devices at once, instead of having to create individual CloudChannels for each and every individual LoRa device as it is the situation today. 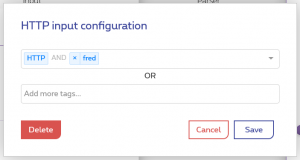 See this little “Script” icon on the bottom left of the screen in the CloudEngine Flow UI? Here is where the major upgrade comes into play:

We’ve just switched to the scripting interface of the CloudEngine… Anyone with a bit of skills on JavaScript will find its way and will be up to speed in no time. You can now script within your Flows! Next to handling inbound and outbound endpoints, we give you a whole bunch of ready to use modules such as data structure manipulation (arrays, JSON, XML, text, …), binary, base64, hex, and regex operations, mathematical functions,  value persistence and storage, geo based calculations not even mentioning chatbots integration such as with luis.ai. So now, indeed, we’re talking!

On top of this, each Flow can independently be designated as “high” or “eco” priority, whether your flows should run immediately without any queuing to support real-time applications or can afford slight queuing before being processed.

Check the EnCo marketplace early February for the appearance of the CloudEngine, or join us at the first EnCo Night at Co.Station on February 1st to discover the CloudEngine.

How to retrieve your IoT data with a MQTT client ?

In most cases, an IoT Telco operator allows you access the data from your sensors by pushing this data to your application over HTTP. We have seen in previous articles that Proximus CloudEngine makes it possible to benefit from other integration capabilities, ranging from Microsoft Azure and SAP IoT Cloud down to various protocols such as sFTP and mail. To the already existing CloudEngine’s ability to use its own MQTT client to connect to your MQTT broker, we add now the ability for your MQTT client to connect to the CloudEngine’s broker.

In this article, you will discover how Proximus makes it easier to automate the integration of LoRaWAN sensors connected to our national public LoRa network with the Microsoft Azure IoT Hub. We will indicate that this integration can go far beyond just forwarding messages to an event hub.

Maddalena s.p.a. is an Italian company providing water readers that are frequently used in Belgium and across Europe. Water meters such as the PR-MWM can detect the lowest flow rates (from 0.5 liters / hour). So this makes them, according to this company, “the ideal meter for billing cold water consumption in collective housing”.

Maddalena understood the market’s need for connected meters quite well. So they teamed up with Kerlink to create a LoRaWAN™ add-on radio module. This module makes it possible to collect water consumption data over long distances. Its battery life can last up to 15 years thanks to the low power requirements of LoRaWAN and an optimization in the way this module works.